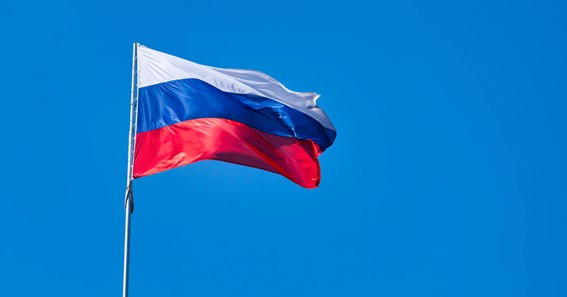 Very often you have seen Russia flag on TV or In newspapers because it is trending now due to the Russia-Ukraine invasion. Today, we will discuss and study the flag of Russia. Russia is the biggest country by land, almost the European continent is covered by Russia. An encompassing one-eighth of Earth’s inhabitable landmass. Russia, officially the Russian Federation, is a country that expanded Eastern Europe and Northern Asia. It extended across eleven time zones and borders fourteen counties by land. Without wasting your valuable time let’s get started and study the Russia flag.

What Is The Russia Flag?

The Russian flag consists of three equal horizontal strips of white, blue, and red color. The stripe of the white color is located at the top position then comes the strip of blue color at the middle and last is the red color strip. There is no symbol or cart located on the flag of Russia. The flag of Russia is one of the simplest flags on the earth.

What Is The Russia Flag Meaning?

The Russia flag meaning tells you about the history and culture of Russia. The white color indicates the nobility and frankness of the country with other countries. The blue color represents faithfulness, honesty, impeccability, and chastity. And the red color for courage, generosity, and love. So, this meaning of the flag of Russia revealed some traits of the country.

Let’s have a look at the Russia flag history.

Russia with more than 186 ethnic groups and extensive history. The first modern flag to be hoisted in the country was taken from Peter the Great, who had ambitious plans for the country. He wanted to transform Russia into a modern state with a powerful navy. So, he visited the Netherlands to know more about shipbuilding techniques and concepts. Later in 1699, he adopted a flag for the Russian merchant ships, the flag consisted of the Dutch red-white-blue tricolor. The flag was used on ships but wasn’t considered the national flag.

The official flag at the time was the Imperial Standard of Tsar, consisting of a yellow background with Tsar insignia at the center.

In 1917 the end of the monarchy and the rise of the Soviet regime. The first flag of the soviet system is considered a red background with the term RSFSR on the upper left corner in Russian. Later it changed to feature a hammer and a sickle with a five-pointed star at the top and a blue vertical line on the left side. It was the communist Russia flag. It remained in action from 1954 to 1991.

In 1991 the Soviet system dissolved and the flag was modified and changed into tricolor horizontal strips of white, blue, and red color. The flag was officially adopted on 21st August 1991. In 1993, the flag underwent a proportion change, and the blue strip became darker.

Neighboring countries of Russia are,

The official language as well as primary language of the majority of people in Russia is Russian. It is the toughest language to learn for an outsider. It belongs to the estern branch of the Salvic family of language.

The currency of Russia is the Russian Ruble and its capital of Moscow. Currently, the Ruble is falling behind the dollar because of the sturmbling economy of Russia.

Being the largest country in the world, Russia has less population because of World War II. Currently, the population of Russia is 146,070,080 as of 2022.

The total area of Russia is 6.602 million mi sq. it is the largest country on the Earth.

Russia has a continental climate, with long winters and brief summers. There is a wide range of summer and winter temperatures and relatively low precipitation.

What Is The Russian Flag Based On?

The flag’s design is based on the Dutch Tricolour which follows the top to bottom order of red, white and blue, but for Russia is in the order of white, blue and red.

What Is The Russian Flag Called?

The modern flag of Russia is a tricolor flag consisting of three horizontal fields: the top is white, the middle is blue, and the bottom is red. Initially, the flag was used only for Russian merchant ships but in 1696 it became the official flag of the Tsardom of Russia until the year 1922.

What Is The Picture On The Russian Flag?

The flag of Russia (Russian: Флаг России) is a tricolor flag consisting of three equal horizontal fields: white on the top, blue in the middle and red on the bottom. The flag was first used as an ensign for Russian merchant ships and became official as the flag of the Tsardom of Russia in 1696.

Does Russia Have Two Flags?

In this article, you have learned about the flag of Russia including other information regarding the country. We all know that flags are used mainly in warfare, and to some extent they have remained insignia of leadership, serving for the identification of friend of foe and as rallying points. Russia is a very big country even though many regions of the country are still unknown. Now, you have understood everything about Russia flag.