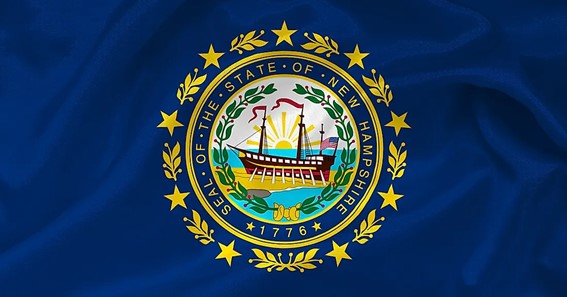 Before knowing about the New Hampshire flag, you should know about New Hampshire itself. New Hampshire is a state located in the New England region of the northeastern United States. It is defined by its quaint towns and large expanses of wilderness. In the North, White Mountain National Forest is known for winter sports. The State is popularly known as the Granite State for its extensive granite formations and quarries, but also has three other nicknames including Mother of River, the White Mountain State, and Switzerland of America. So, without further delay let’s get started and know about the New Hampshire flag.

What Is The New Hampshire Flag?

The New Hampshire flag has a blue background. The text, circles around the seal and the wreath, and the stars are gold. The state seal is in various colors, including red, gold, blue, and white.

The seal is surrounded by the wreath of laurel leaves with nine stars interspersed. In the center of the seal is a ship which is the USS Raleigh. It was one of the 3 warships sponsored by the Continental Congress for a new American navy, built in 1776, in Portsmouth, New Hampshire.

The state of New Hampshire officially did not adopt the New Hampshire state flag until 1990 even though it was admitted to the Union in 1788. The state had many flags before that but they were mainly for the military units or other parts of the government. We will understand them below.

What Is The New Hampshire Flag Meaning?

The New Hampshire flag mainly features the depiction of the USS Raleigh warship. This ship was built in the 1700s in Portsmouth and was one of the first warships to be sponsored by the Continental Congress. A laurel wreath surrounds the seal, which is a symbol of honor, victory, and fame. There are nine stars to join the Union. The water in the image represents the harbor of Portsmouth, and there is also land that is depicted as granite, which represents the sturdy character of people in the state and the rugged landscape.

Now, let’s have a look at the New Hampshire flag history.

Before 1909, New Hampshire state did not have an official flag. However, regimental fags were used unofficially to represent the state. A flag similar to the design that is used today was first adopted in 1909. However, this design was changed in 1931 after the state’s seal was modified. Since then, however, the flag has flown over the state unchanged.

The proposals to change the seal to the old man of the mountain have been suggested, but the flag has remained unchanged. The state of New Hampshire has two official seals. Most people however are familiar with the seal that is used on the flag and on official documents.

The neighboring states of New Hampshire are,

To know more about the state of New Hampshire let’s understand some important facts or aspects regarding the state.

The official language of New Hampshire is English, which is the designated language of all official public documents and records, and of all public proceedings and nonpublic sessions.

The population of the state of New Hampshire is around 1.41 million and it is the 41st most populous state in the United States.

In New Hampshire, the climate and average Weather year round like, the summers are warm, the winters are freezing and snowy, and it is partly cloudy. Over the course of the year, the temperature typically varies from 16 degrees F to 83 degrees F.

What Does New Hampshire Flag Represent?

Adopted by the New Hampshire State Legislature in 1909, the state flag displays the State Seal of New Hampshire on a blue field surrounded by Laural leaves and nine stars representing New Hampshire as the ninth state to join the union.

Who Designed The New Hampshire Flag?

What Are 3 Interesting Facts About New Hampshire?

In 1775, New Hampshire became the first state to declare its independence from England. The first American in space, Alan Shepard, was born in Derry, New Hampshire. His historic flight was made in 1961. The first private citizen in the history of space flight was Christa McAuliffe, a Concord school teacher.

What Is The Boat On The New Hampshire Flag?

The frigate Raleigh, built at Portsmouth in 1776, as one of the first 13 warships sponsored by the Continental Congress for a new American navy, became the centerpiece of the 1931 seal. The figure 1784 on the old seal was changed to 1776.