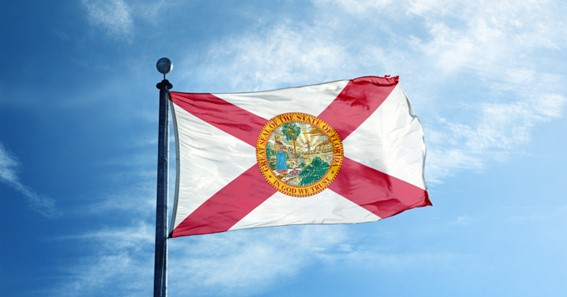 Today we will study the Florida flag in detail along with its meaning and history. Is a state which is located in the Southeastern region of the United States. Florida is a great place to live and it does not have any estate and inheritance taxes. It is famous for its amusement parks, beach resorts, warm and sunny climate, and nautical recreation. It has attractions such as Walt Disney World, the Kennedy Space Center, and Miami Beach draws tens of millions of visitors annually. Without further delay let’s get started and know about the Florida flag.

What Is The Florida Flag?

The Florida flag consists of a red diagonal cross going through the whole flag. There is then also the state seal superimposed in the middle of the cross. This seal of the state’s flag is very complex and has a condensed design. The remaining flag is of white color.

The flag shows a red saltire over a white field. The flag of Florida also features many other colors in the state of Florida located in the center of flag colors including green, blue, and gold.

Every color and symbol has a specific meaning related to history and the state’s specialty. Let’s know the Florida flag meaning in detail.

What Is The Florida Flag Meaning?

The Florida flag represents the land of sunshine, flowers, palm trees, rivers, and lakes. The seal, located at the center, features a brilliant sun, a cabbage palmetto tree, a steamboat sailing, and a Native American Seminole woman scattering flowers.

The seal represents a shoreline on which a Seminole woman is spreading flowers. According to legends, the woman is the historical heroine Milly Francis, but there is no documentation supporting this.

Now, you know all about the meaning and colors of the flag of Florida. Let’s know the history of the Florida state flag in detail.

In the history of Florida, many banners and flags have been used and rejected. This includes the Cross of Burgundy used in St. Augustine and the crown of Castile used in Pensacola. When the state of Florida underwent the control of Great Britain in the 19th century, the original union flag was used for a short period of time.

In 1783, Spain gained control of Florida and two years later, a new battle flag was selected and used in Florida state. And this flag featured a tri-band design of red and gold color.

In the 18th century, Florida did not have an official state flag. In 1860, the Lone Star and Stripes of Texas was used as a temporary flag. After that, Florida became a member of the confederacy, and three versions of the Confederate flag were thrown through the state.

In the 19th century, the governor of Florida applied for the addition of a cross and the application was approved in 1900 and was added to the flag.

Therefore 6th November 1900 onward the flag consisted of both the cross and the seal, although it has been modified slightly.

The version that is used today was modified in 1985.

The neighboring countries of Florida are,

To know more about Florida state you need to understand some basic factors in the state as,

In Florida state, English is the official language, and in addition to English, Spanish and French have also been spoken in the state of Florida.

The currency of the state of Florida is the US dollar.

The population of the state of Florida is around 22 million as of 2022. Out of the total population, the White population is 76.9%, and the remaining is the black population.

In Florida, the summers are hot, the winters are cold, and it is a wet and partly cloudy year around. Throughout the year the temperature typically varies between 40 degrees F to 88 degrees F.

What Does The Florida Flag Symbolize?

Officially Adopted: May 21, 1985
On a white field emblazoned with a red X and the state seal, Florida’s flag represents the land of sunshine, flowers, palm trees, rivers, and lakes. The seal features a brilliant sun, a cabbage palmetto tree, a steamboat sailing and a Native American Seminole woman scattering flowers.

Why Did Florida Choose Their Flag?

The design of the state flag of Florida features a red saltire that symbolizes the cross on which St. Andrew was crucified. It is thought that this feature was added to the flag to commemorate the state’s contributions to the Confederacy.

Who Is The Woman On The Florida Flag?

The seal features a shoreline on which a Seminole woman is spreading flowers. Legend says that the woman is the historical heroine Milly Francis, but there is no documentation supporting this.

What Is The Symbol Of Florida?

(1982) FLORIDA PANTHER – A large, long tailed, pale brown cat that grows to six feet or longer. It is the most endangered of all the State symbols. Its habitat is usually the same as that of the white-tailed deer, which is the mainstay of its diet.

While reading this article you found that the flag of Florida was adopted in 1985. The flag consists of a white field and a red cross on it. Also, a coat of arms is placed at the center of the flag. The meaning of the coat of arms is already described above in detail. Florida is not a country but a state in the US, therefore, the flag of Florida is not a national flag. Whenever there is a country representation in the other country, they use the national flag, not the Florida flag. Now, you have understood everything about the Florida flag.

Games with an interesting game plot