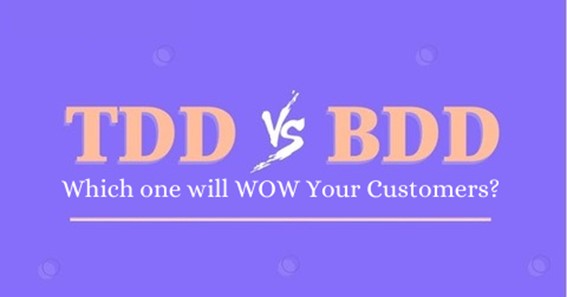 TDD vs. BDD: Which one will WOW Your Customers?

TDD vs. BDD – A quick insight:

If you walk around the cubicles of most large organizations’ software development departments these days, you’ll hear terminologies like TDD and BDD and red/green/refactor being used more frequently. So TDD vs BDD, which one do you think will WoW your customers? Let’s figure it out in this article. It’s not easy to get tdd vs bdd started and running smoothly. But with a little help from these tips, you’ll be WOWing your customers in no time.

This is often a five-step red/green/refactor process, with red denoting a failed test and green denoting a successful one. This is how it goes:

What’s the point of failing first? Working from a failing test first has the major benefit of keeping developers honest about where the issues are. They often get to see the faults before they’ve even created the code that causes them. Developers are, in essence, resolving issues while the code is still fresh in their minds.

BDD: Behavior-driven design (BDD) is a type of user-centered design for specifying requirements as user stories. It typically employs natural language in a structured format to help nontechnical stakeholders read and understand functional requirements from outside technical experts. BDD focuses on customer development, partnering with users to create an understanding of what features will meet their needs, and designing a solution that meets those needs in a way that aligns with their own.

The use of TDD and BDD frameworks together can improve the software development process. There are various frameworks for web automation testing that you can choose based on your project needs.

Simply putting it, BDD focuses on improving communication between team members by using a common language when discussing requirements, which in turn improves collaboration and helps identify defects in projects more quickly. The focus of BDD is not only on testing but also on defining and documenting what success looks like in terms of desired outcomes for a particular feature or system.

Tired of writing tests? Then time-shift them!

There are many ways to save valuable time when testing your application or system. One of the most popular is using the technique of “time-shifting.” With this method, developers can write their tests before they write their code.

Time-shifting has been found to be more beneficial than other ways of organizing tests because it gives developers a better understanding of what they should do and what needs to be fixed before they even start coding.

Although the team will spend some more time researching and developing tests before beginning development, they will save even more time later in the process by avoiding a lengthy quality assurance (QA) step.

This helps to avoid what most teams anticipate: a lengthy QA stabilizing period following the completion of development work. Because you don’t have the rework cycle that teams are so used to thrashing around in at the end, the time you invest upfront pays off after development is complete.

Talking about TDD vs. BDD, yes, both tend to slow down your team’s velocity in the beginning while they learn how to create the tests. However, they will notice the time savings when there is almost no QA work to be done once the code has been written.

Conclusion: Developers are increasingly seeking to provide the customer with a better experience by listening to their input. Customers have higher expectations, and it’s important for them to meet those. The technology they use affects their idea of the company too. Organizations that focus on agile and DevOps methodologies like TDD and BDD will have a competitive advantage over those that don’t in this new world order. Coming to the conclusion of TDD vs. BDD, test-first techniques are essential more than ever.

How To Wear A Denim Dress

Things You Didn’t Know You Could Buy with Bitcoin