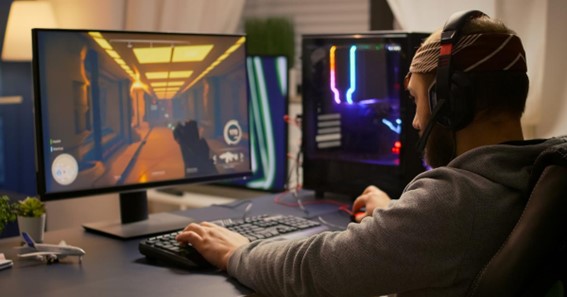 It’s no secret that video games are a big business. In the past, video games were mostly played on personal computers or game consoles. But with the advent of smartphones and tablets, more and more people are playing games on mobile devices. And as graphics get better and better, people are spending more money on video games. In fact, in 2021 global gaming market almost reached $200 billion. That’s a lot of money!

While two-dimensional (2D) games have been popular for decades, three-dimensional (3D) games have only become possible with the advent of more powerful computer hardware and software. Today, 3D games are the norm, with almost all new releases being in three dimensions. While the basic concept of a 3D game is simple – objects are rendered onscreen in full three-dimensional detail – the technology behind it is quite complex. In order to render a 3D scene, the computer must first create a virtual camera. This camera can be moved and rotated, just like a real camera, to give the player different viewpoints of the game world. Next, the computer must generate a 3D model of each object in the scene. These models can be created from scratch by an artist, or they can be generated automatically from photographs or other 2D data. Finally, the computer must apply textures and lighting effects to these models in order to create the illusion of a real environment. 3D environment design is one of the big-ticket items along with character creation in the 3d video game design creation process. The result is a fully immersive 3D gaming experience that can transport players to amazing virtual worlds.

3D video games are video games that use a third dimension – typically height, width, and depth – to create an immersive gaming experience. While most mobile games are still 2D, more and more console and PC games are using 3D graphics. And as VR technology becomes more common, we’re likely to see even more 3D video games in the future.

The most profitable 3D video games tend to be action-adventure or first-person shooter genres. Games such as “Grand Theft Auto V,” “Tomb Raider” and “Call of Duty: Ghosts” have generated hundreds of millions of dollars in revenue. These games often feature high-quality graphics, engaging gameplay, and large marketing budgets. As a result, they tend to attract a wide audience and generate significant income for their developers. While there are many other genres of video games that can be profitable, these are typically the most successful.

2. The history of 3D video games

The first 3D video game is generally agreed to be “Sketchfighter 4000”, which was released in 1992. However, it wasn’t until 1996 that 3D graphics became commonplace in video games with the release of “Super Mario 64”. Since then, 3D graphics have become the norm in video games, with most games now using some form of 3D graphics.

When it comes to 3D video gaming graphics, there are a few key elements that are essential for creating an immersive and realistic experience. Firstly, the game world needs to be well-designed and detailed. This means that all of the textures, lighting, and shadows should be realistic and in keeping with the game’s setting. Secondly, the character models need to be lifelike and believable. Unfortunately, many games fall short in this area, resulting in characters that look unrealistic and cartoony. Finally, the animations need to be smooth and fluid. If a character’s movements are jerky or unnatural, it can completely break the illusion of being in another world. When all of these elements come together, they create a 3D gaming experience that is truly immersive and visually stunning.

3. How 3D video games are made

Creating a 3D video game is a complex process that involves everything from storyboarding to coding. First, the game’s designers come up with an idea for a game and create characters, levels, and puzzles. Then, artists create the visual elements of the game, including the backgrounds, textures, and objects. Once the game’s art is complete, programmers code the game’s mechanics and gameplay. Finally, testers play the game to make sure it is fun and challenging.

Three-dimensional video games are created using a variety of different methods. Some elements, such as the background and environment, can be created using two-dimensional images that are converted into three dimensions. Other elements, such as the characters and objects, must be created from scratch using three-dimensional modeling software. Once all of the individual elements have been created, they are then combined into a single file and uploaded to a game engine. The game engine is what allows the player to interact with the game world and see the different elements in three dimensions. Finally, the game engine is used to render the game world in real-time on the player’s screen. This process is repeated again and again every time the player moves their character or interacts with the game world in some way.

The cost of developing a 3D video game is typically higher than the cost of developing a 2D game. This is due to the increased complexity of creating three-dimensional graphics and animations. In addition, 3D games often require more storage space and more powerful hardware to run smoothly. As a result, development costs can vary widely depending on the size and scope of the project. However, many game developers believe that the extra investment is worth it, as 3D games tend to be more immersive and engaging for players. Ultimately, the decision of whether to develop a 2D or 3D game comes down to artistic vision and budget.

4. The benefits of 3D video games

As the world of video gaming continues to evolve, so too do the graphics that are used to create these virtual worlds. One of the latest trends in video game graphics is the use of three-dimensional (3D) images. While 3D graphics have been used in some form or another for decades, they have only recently become widely available to the general public. There are a number of benefits that come with using 3D graphics in video games. First, it allows for a more realistic experience. Players can now explore virtual environments that look and feel very similar to the real world. This can lead to a deeper level of immersion and engagement with the game. Secondly, 3D graphics can help to create a more believable and compelling game world. In previous generations of video games, many of the environments and characters were quite obviously fake. With 3D graphics, however, game developers can create virtual worlds that look and feel almost indistinguishable from reality. Finally, 3D graphics give developers more flexibility when it comes to designing games. In the past, limitations in technology meant that designers had to make many concessions when it came to creating their vision for a game. With 3D graphics, however, there are few limits on what can be created. As a result, we are seeing a new wave of innovative and creative video games that would not have been possible without this technology.

5. The future of 3D video games

The future of 3D video games is looking bright. With the release of the Playstation 4 and Xbox One, there has been a renewed interest in console gaming. In addition, many developers are now starting to experiment with virtual reality technology, which has the potential to revolutionize the gaming industry. However, it is still unclear what direction 3D gaming will ultimately take.

As VR technology becomes more commonplace, we’re likely to see even more 3D video games in the future. Additionally, as graphics continue to improve, we’ll see even more realistic and immersive 3D games. So if you’re a fan of video games, be sure to keep an eye out for the latest and greatest 3D titles!

One possibility is that 4D gaming will become increasingly popular. This would involve games that use smell, touch, and temperature to create a more immersive experience. Alternatively, 3D gaming could become more realistic, with photorealistic graphics and lifelike environments. Whatever the future holds, it is clear that 3D gaming will continue to evolve and surprise us.

3D video games are becoming more and more popular as developers find new and innovative ways to use the technology. The benefits of 3D graphics include a more realistic experience, a more believable game world, and increased flexibility for designers. Additionally, the future of 3D gaming looks bright with the release of new consoles and increasing interest in VR technology. So if you’re a fan of video games, be sure to check out some of the latest 3D titles!

Real Estate Investing in Rio Rancho: How To Do It Correctly