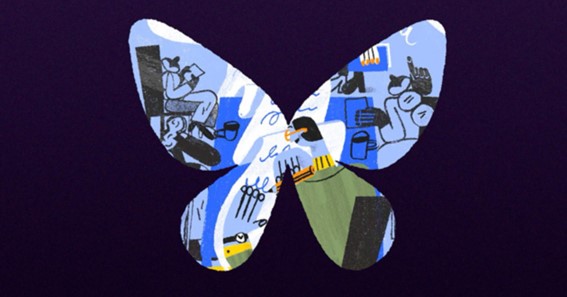 Butterfly Effect in the Financial World

Understanding the chaotic world in which we live is the first step in overcoming this unpredictability. One can direct the deduction in a particular direction by identifying the factors that affect the weather or the price of a stock. Moreover, one must keep in mind that the eco, social, and financial frameworks are completely intertwined, and any bad changes to any of these frameworks may result in unfavourable effects. The butterfly effect is named from the narrative about a butterfly fluttering its wings in one region of the Earth, which then causes a hurricane to happen in another. How does this happen, though? Let’s discuss the butterfly effect in online stock trading.

What is the Butterfly Effect?

The stock market of one country might be impacted by even a minor political gesture made to another. It should therefore come as no surprise that several financial professionals have proposed using the butterfly effect to forecast the behaviour of financial markets. With globalisation taking hold during the past 30 years, even a little increase in one country’s stock market could have significant effects in another region of the world. The butterfly effect applies even to the seemingly small expenditures you make every day. The way you spend money and invest it has a large effect on your long-term financial stability. Within hours, a selloff ripples out into other markets. A version of the butterfly effect can also be applied to everyday financial decisions that you make.

Edward Lorenz discovered the butterfly effect when he observed that runs of his weather models that had a very small change in starting conditions produced significantly different results. The butterfly effect (in chaos theory) represents a sensitive dependence on initial conditions, i.e., very small changes in a single state of a deterministic nonlinear system are associated with large differences in the subsequent state. The butterfly effect, also known as ripple effects or chaos theory, describes a narrative in which a butterfly flaps its wings over one area of Earth, then causes a storm in another area.

Examples of the Butterfly Effect.

This rise of leaving the nest is an example of the butterfly effect – the idea that a slight change in one location may cause a larger trend to occur in another. Because globalisation has taken hold over the last 30 years, even a slight rise in the stock market in one country could have significant effects elsewhere on Earth. In the financial world, we have had events with butterfly effects. On 19th October 1987, the stock markets of all countries crashed.

Based on the above examples, it is evident that the butterfly effect has great relevance to the world of finance. It is not surprising that a number of financial experts have formulated theories about how The Butterfly Effect could be used to predict financial market behaviours. Carefully balancing one’s personal values against one’s money is a second major financial application of the butterfly effect. The third important application of The Butterfly Effect to the financial world is that of carefully aligning your personal values with your investments.

Tips for investors in Butterfly Effect

Among the ways to achieve this is by diversifying our portfolio of investments. One ought to be wise enough to avoid gambling all of the resources and putting everything on the line with what they can.

Even while not all factors can be foreseen or even measured, it is necessary to remember that the key to successful online stock trading is to always be prepared in advance. Although the butterfly effect is widely used in finance, it is prudent to avoid overusing it to describe every circumstance. The fundamental objection to the butterfly effect is that it is impossible to establish a link between two seemingly unrelated events. The phenomena are also always susceptible to the bias of perspective, in which one can only be certain that one occurrence may have caused another in hindsight.