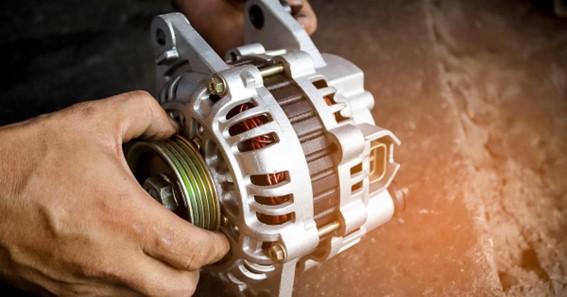 5 Signs of a Failing Alternator

Your alternator is a core component that must function if your car is going to stay on the road very long. If it fails while you are driving, you might not notice at first, but after just a short time without an alternator, the battery will run out, leaving you stranded where you are until things are fixed.

This happens because the alternator is basically a generator that recharges your battery with a portion of the power generated when your engine fires. This allows the vehicle to power the engine and all the accessories without depleting the battery.

Alternators frequently show signs of failing performance well before they totally stop working, so there are a few common symptoms to look out for. The faster you diagnose a failing alternator, the longer you have to replace it, which gives you the chance to shop for the best prices on your auto parts.

These common signs of a failing car alternator are arranged in a rough order of severity, but any of them could pop up as your first sign, depending on how your alternator goes bad.

Dimming headlights can happen when an alternator’s performance is borderline or when your battery gets a little old, so it is not always a sign you have to act now. It is a sign you should get your alternator tested, however.

If the lights start flickering, that is another story. Flickering lights are not receiving enough power to sustain operation, which means they could cut out completely at any moment. It is pretty obvious what a big safety concern that could be if you are driving on the highway when it happens. On top of that, it is a sign of imminent battery failure that will cause the engine to stop working.

click here – How to build up a successful career in real estate?

If you run a car without a functional alternator for long enough, you will wind up with a dead battery as a matter of course. Most of the time, this happens because the battery did not completely die, but is too weak to start the vehicle again. Sometimes, especially if you are driving long distances, the car will die while in motion, in which case your manual brakes and steering will be needed to safely stop it on the side of the road.

It is possible to swap in a battery and start the car again or to charge it and go short distances without an alternator, but these options are limited and should only be used to bring the car someplace where a repair can be made. Even then, they are not a good idea if a tow is an option.

5 Ways to Beat a Criminal Charge

How to build up a successful career in real estate?